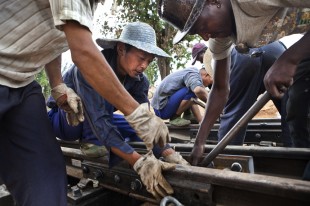 Chinese and African construction teams work together on a development project in Angola. Picutre: Dieter Telemans/Panos

Anyone following my Twitter account will have noticed that I’ve recently developed a strange obsession with all things China. China even featured in my blog post last week, although my key message was about development partnerships.

The reason I’ve been interested in all things China is that I am starting a new job in August. I’m moving to the UNDP office in China for two years to lead a team working to support China to cooperate effectively with other countries and develop its international positions on issues such as climate change and what comes after the Millennium Development Goals.

When I first found out that I had got the job, obviously I was very excited.Three reasons stood out.

First, the relationship between China and African countries is at a unique juncture. For example, last month the Chinese Premier made a major speech at the African Union, laying out 4 guiding principles for cooperation. The speech has been seen by some as the most significant statement of Chinese strategy towards African countries for a long time, perhaps 50 years. Many African countries have already welcomed it, and over time, it will be very interesting to watch out for how this strategy becomes a reality.

Second, China’s role in international development issues at the UN is at a critical juncture. For example, China has a great deal of experience to share on what steps are essential to lift millions of people out of poverty, which can help shape the post-2015 development framework. Similarly, as I set out in a blog post a few years ago, China is making strong efforts on green growth, and in future may share such lessons with others and take the opportunity to do even more.

Last but not least, the relationship between China and other development actors is changing. Again last month, the People’s Bank of China and the African Development Bank announced a new joint £2bn fund, called the Africa Growing Together Fund. The lessons learnt from these two actors working together so closely could be immense. And groups such as the Global Partnership for Effective Development Cooperation and the UN Development Cooperation Forum offer spaces for more collaboration between China and other development actors to emerge.

These are all key opportunities for UNDP to support China to respond, lead and innovate.

However, despite this huge opportunity, there was one practicality that worried me, which at first might seem trivial: will I still be able to blog? The reason I was worried about this is that my experience of blogging in DFID has been fantastic – and far more than a fun “add on” to my job. It has enriched my work through direct feedback from readers as well as helping me think through my work and what change it really delivers.

Thankfully, UNDP has a blog roll called Our Perspective and I’ll be able to blog from there, just as regularly as I have done from DFID. I might also experiment with the Chinese equivalents of Twitter, such as Weibo or We Chat, and even Instagram, which my new top boss, Helen Clark, has just started using.

But it’s a few months to go until I move, so until then, I’ll still be blogging on this site, and tweeting as usual, with a strong Chinese flavour! So please do share your tips for living in Beijing, but more importantly your thoughts on what I should be focusing on in my new role, and any cutting edge research I should be aware of to help my team and I do a great job. After all, the best blogs are a conversation.

How can we scale up fortuitous partnerships?Uncategorized
Genuinely Learning from Saudi ArabiaUncategorized