COVID19 in Africa: Can early momentum be maintained?

Why is the spread of COVID19 progressing so much slower across Africa than the rest of the world? Over the last 6 months with these graphics we have constantly asked ourselves the same question, and we are about to launch some work based on our extensive data collated over that period to analyse this more closely within the continent.

But one clear trend we saw early on in our analysis marked Africa out – early action. Our graphic this week reviews what that early action looked like… Not only closing borders and quarantining at borders earlier than many other countries across the world, but also bringing in lockdowns and social distancing measures such as mandatory facemasks in early on. It was an impressive record for a continent often seen as “behind”. In the case of COVID19, most African countries were “ahead”.

At the same time, our analysis does raise some cause for concern health-wise. Almost six months since COVID19 entered Africa, can African countries remain “ahead”? Especially having opened up more… Yes there is still social distancing in most African countries and use of masks in almost all countries, but as countries open up to international travel these challenges may increase if not well managed.

More donations of test kits, for instance, could go a very long, long way in most African countries.

That said, we must reiterate another trend we have noticed throughout our analysis. No one African country is the same – and how African countries are dealing with COVID19 in the short and medium term is no exception. Each country requires deep and careful analysis in terms of future strategy and international support. That’s why we are here, doing this analysis, and have the data to help chart the way forward based on real evidence of what does and doesn’t work, rather than conjecture, wishful thinking or even ideology!

Take a look at our data below and let us know your reflections and suggestions for further lines of enquiry.

The data was collated from a range of sources including: government websites and media reports, the IMF policy tracker; the US Chamber COVID19 Dashboard; Our World in Data, Africa CDC and Worldometer. Our methodology is entirely in-house, based on analysis of social distancing categories and other trends. 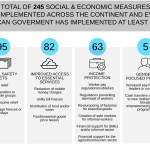 Can African countries deal with COVID19 into the long-term?analysis, infographic, Social Media 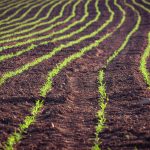