On October 27th 2018, at the request of several Ambassadors of African countries based in Beijing, Development Reimagined convened a first-of-its-kind retreat for Ambassadors and a small group of select and high-level “friends of Africa” to celebrate and reflect on the outcomes of the 7thForum of China Africa Cooperation and Summit that was held from 3-4 September 2018.

The celebration was timed with the visit of the incredibly talented UNAIDS Good Will Ambassador Steve Bedi and five other talented musicians from Ghana, who entertained the group over dinner as the retreat drew to a close.

Prior to the celebration, special guests including the Former Finance Minister for Guinea, Malado Kaba as well as Brian Kagoro, Executive Director of UHAI Africa Group and former head of UNDP Africa Governance team, and Antseze Were, joined the group to support the Ambassadors and diplomatic representatives to reflect together on what has been achieved so far in partnership with China, what opportunities and challenges lay ahead and what next that is in the best interest for African citizens, especially the poorest and the youngest, who are, our future.

The meeting was held under Chatham House rules, to encourage frank discussion, and translation was provided from English to French and Portuguese where needed.

Ambassadors and diplomats discussed topics from how to leverage China’s loans and other finance without getting into debt distress, how to address trade deficits with China including by increasing imports into  China, as well as how to better engage journalists on Sino-African issues and channel aid from China to support the UN Sustainable Development Goals.

The retreat was sponsored by Senyuan Group, a renewable energy company based in Henan Province.  At the end, His Excellency the Ambassador of Senegal, the new co-chair of FOCAC, thanked the organisers and sponsors for their work in supporting the diplomatic Corps in Beijing, and encouraged them to continue to build their capacity to get the most out of the FOCAC agreements and plan towards the next FOCAC to be held in Dakar in 2021. 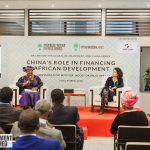 Dr. Okonjo-Iweala puts her Lens on: China, climate and corruptionEvents